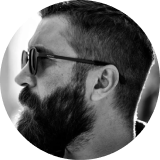 Who is Max Moghadas?

Max Moghadas is CEO and trainer of ”shark diving school“. He started diving in Qeshm, and with its expansion in Germany, Holland, Thailand, etc., after a few years, he reversed his migration from Germany to Iran due to environmental concerns. Max’s goal in entering diving was to discover the unknown underwater world and dive in it, and its many challenges and difficulties made him continue on this path.
Among his main activities are: Documenting, photographing and filming underwater . All these things, along with diving training and coaching in this field, have made Max, as an environmental activist, share his discoveries of the underwater world with others.
Max Moghadas started filming underwater professionally a few years ago and has been engaged in making several documentaries. His last activity was in the direction of recording the texture and values of the waters of the Persian Gulf, which is the purpose of making a documentary of the Persian Gulf, to show the problems, beauties, events inside it, etc., and it will be broadcast soon. This route continues in other seas such as the Indian Ocean, Hawaii, etc., and Max is still documenting the seas of the 5 continents. Max’s documentation in the field of seas does not end only with this project, and among his important activities in this field, we can also mention the Seven series.

What is Max Project?

He has designed a huge project for underwater filming, this documentary project, goes to the oceans of 5 continents in the form of a series, this project is a hard and specialized record in the world that the story of his documentary connects 5 continents. As the mountaineers of the 8,000-strong Himalayan club, he believes that ocean-going itself is a new concept and record, and that Iran can become a flagship in this regard.

Why is the Max project valuable?

He considers his documentary project a social responsibility, because making underwater documentaries is a very specialized job, and the production of any such document, especially in this period of extinction and the transformation of habitats at any time, is a very valuable task, also in line with Making the documentary, he seeks to open the way for communication with local experts in the oceans, in fact seeking to build a chain of communication to build sustainable tourism in the open water and to share local and popular knowledge to preserve habitats. It is unique. In fact, he seeks the roots of local knowledge and underwater worlds, and believes that local knowledge keeps the unique species of each region alive, and that biodiversity depends on raising awareness of the local community, and that all communities can be nourished by this documentation.

The experiences of Max